Casai and Someone Somewhere: The Gift of Giving Local

There are currently over 10 million artisan workers in Mexico; many born into the trade and taught how to sew, weave and knit at very young age. Unfortunately, very few artisans are able to make a living from their craft; some making as little as two USD a day.

Someone Somewhere is a socially conscious Mexican clothing brand dedicated to cultural and economic sustainability. They work with artisan communities to provide jobs and collaborate on beautiful products that combine traditional techniques with modern millennial trends.

At Casai, we believe gifts are more meaningful when we know who made it. From the furniture in our apartments to the art on the walls and the local experiences we offer our guests, we ensure that every part of the Casai experience tells a local story.

This holiday season, we teamed up with Someone Somewhere to surprise our staff with a custom-designed sweatshirt that tells a story. Someone Somewhere invited us to Tenango de Doria, a small town tucked away in the mountains of Hidalgo, Mexico, where we got to hear – first-hand – the stories of the artisans who helped make them. Watch the video below to hear their stories and keep reading for a Q&A with the Someone Somewhere co-founder, Antonio Nuño.

There are [globally] more than 200,000,000 artisans living in extreme poverty and 90% of them are women. If we consider four family members per artisan, more than one-billion people directly depend on the success of the artisan industry – Someone Somewhere co-founder, Antonio Nuño.

What was the inspiration behind Someone Somewhere?

We are three co-founders and we’ve known each other since we were in primary school. At around 14 years old, we began going on volunteer trips every holiday to rural communities around Mexico. Even though they were a two-to-four hour drive from Mexico City, the realities in these towns were very different from our own. As we became close friends with the locals, we began learning about the different levels of poverty they were forced to endure. It seemed as though living in a rural community was almost a synonym of poverty. We began understanding their reality and the problems they were facing.

What aspect of this reality impacted you the most?

In these communities, most men work in agriculture and most women are artisans who learn to make crafts from their mothers and grandmothers at a young age. And while these women are very proud of their art and enjoy what they do, we noticed very few of them were making a living from their crafts — some making around 2 USD per day.

We later learned the artisan craft industry is the second-largest source of employment in LatAm, Africa, and Asia. Globally, there are more than 200,000,000 artisans living in extreme poverty and 90% of them are women. If we consider four family members per artisan, more than one-billion people directly depend on the success of the artisan industry, which is not often enough to live off of.

Where did the name Someone Somewhere come from?

Someone Somewhere actually comes from the fact that all of our products list the name of the artisans that made them and the community they are from.

Why do you think the industry does not generate a sufficient income?

One of the main reasons is because their traditional designs do not typically match what people were looking for aesthetically. The second reason is that the materials they have access to are cheaper and weren’t a true representation of the amount of work they put into each product.

The third reason is that their sales channels weren’t reaching people the right way. The current way to sell artisan goods is to sell them on consignment to people with trucks, who then pay the artisans back after the sales have been made (around three-to-six months later). The second way is to have one member of the community sell the goods in high tourist areas to customers looking to bargain. All of these issues combined make it difficult for people to live off of their work.

How did this new understanding lead to the conception of Someone Somewhere?

Travel was always a prominent part of our lives and we’ve learned a lot about the cultures and people of the areas we’ve traveled to. But we were still struggling to find brands that matched our style, our lifestyle, our impact needs and our values.

This is when we thought of Someone Somewhere. We combined local Mexican handcrafts with the high-quality materials and sales channels that matched the current demand. 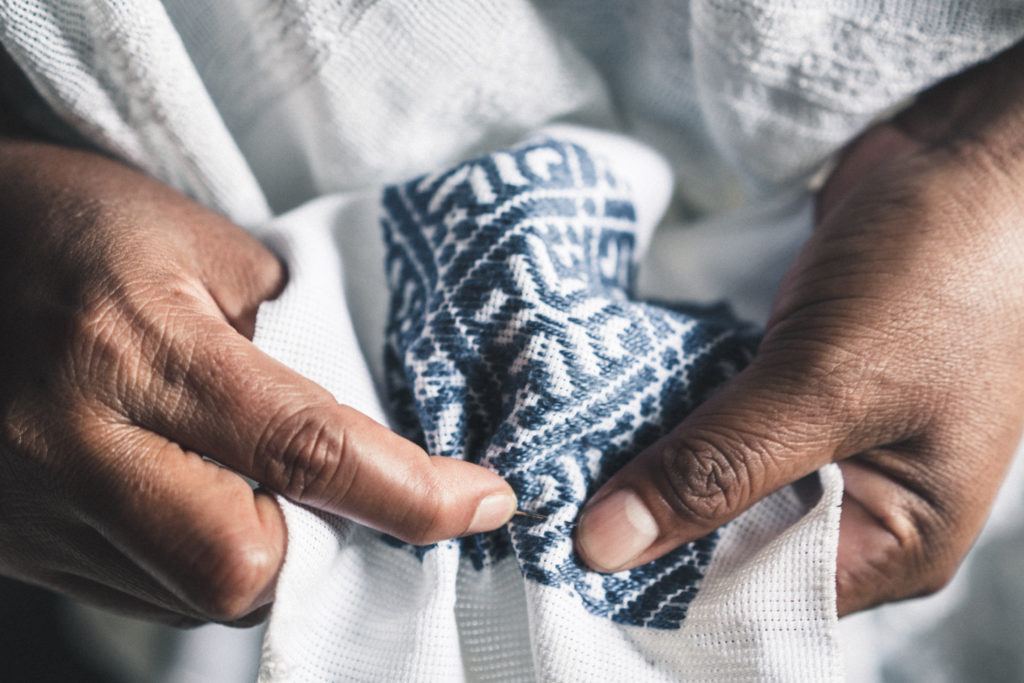 How would you describe Someone Somewhere?

Someone Somewhere is a digitally-native brand on a mission to get millions of artisans out of poverty by creating the best products for adventurous millennials.

We combine traditional handcrafts with our thorough knowledge of the current market to produce traditional yet functional designs we know people will love.

What makes Someone Somewhere unique?

We believe few people will sacrifice the quality of the products they are accustomed to for social impact. However, if you can add a layer of modern design and high-quality materials to an already beautiful product, it can compete in the mainstream market. If you can pay the same price for a product that has social impact vs. a mass-produced one of the same quality, we’ve seen that people lean towards the social impact product.

On the operational side, we have built a supply chain that allows women to work from home, and we’ve combined it with a heavy tech focus, which is rooted in every aspect of what we do. The combination of these elements allows us to positively impact the artisans’ lives while remaining attractive to our target segment.

Follow Casai on Instagram @wearecasai to learn about the companies we work with to bring local stories into your Casai.